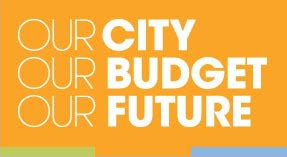 “I want to go from 15 problem solvers around the Council table, to 15,000 staff who are problem solvers, to over a million citizens who can solve the problem – together.” ~Mayor Nenshi
What are your thoughts on the budget process?
Food & Art Citizen Budget Engagement Conversation Potlucks
Food Budget Engagement Potluck 29March11 @6.30pm @1028 Memorial Dr NW
Art Budget Engagement Potluck 05April11 @6.30pm @1028 Memorial Dr NW
Sunnyside LRT station is 2 blocks North.
All welcome. Contact me @403.383.3420 or paul@paulinate.com to confirm attendance.
Background:
Conversation Budget Kit Hosting Workshops (March 16-22)Eager to lead your own conversation...starting March 16 a series of workshops will be held to train citizens, staff and community organizations to host your own conversation using the Budget Kit and discussion guides, and submit your input directly to us.
Check the schedule for a convenient time.
Each year elected representatives make some hard decisions about where our tax dollars are spent. City services affect our lives every day, and the services The City delivers are the path to developing the city you envision. Budgets are a reflection of your values, priorities and needs, and a tool to deliver services that are important to citizens, Council and staff. We want you to tell us: What do you value? What is a priority to you? There’s only so much money available – how is it best spent? What trade-offs are you prepared to make to create the future we all want? Take this opportunity to get involved and have your say!
Don’t wait. Participate!
Our City. Our Budget. Our Future.
http://ourcity-ourbudget-ourfuture.blogspot.com/
Posted by Paul Hughes at 11:34 AM No comments:

LIFA: Land Inventory/Food Assessment
All municipalities, around the planet, should initiate a LIFA. Calgarians are embarking on a LIFA. A LIFA citizen driven group has been formed to implement the LIFA study.
Is your municipality conducting a LIFA? I encourage you to initiate this important study in you community... ASAP!
The Case for Urban Ag powerpoint. 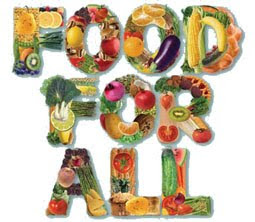 Here's what Oakland did...

Food touches the life of every Oakland citizen. It is a basic human need on par with water,

housing, transportation and other essential urban infrastructure. Though complex and

interrelated, the food system can be conceptually broken down into five basic elements:

social, economic, and environmental opportunities as well as challenges to our every-day

lives and to society as a whole. Such current and interdisciplinary issues as obesity, fossil fuel

consumption, urban sprawl, and job preservation/growth can all be seen through a “food

lens.” Concerns over quality of food, access to food, and the long-term environmental

problems that current food system relationships have not adequately addressed.

Across North America and around the world, a group of diverse actors in cities are stepping

up to identify problems within the current food system that cause harm, and are searching

our cities and the surrounding countryside. Many organizations in Oakland, including

departments within the City government, have been active in seeking solutions to problems

that the food system presents to the community. Over recent years, these efforts have

increased as new organizations, programs, studies, and partnerships have formed.

In June 2005, Mayor Jerry Brown’s Office of Sustainability initiated this study in order to

begin a process of evaluating each element of the food system in Oakland, and to provide

key baseline information on the various activities that represent it. On January 10, 2006, the

…[authorizes] the Mayor’s Office of Sustainability to develop an Oakland

team from the Department of City and Regional Planning, University of

California at Berkeley, at no cost to the City.

This baseline analysis is therefore intended to initiate discussion among City policymakers,

staff, and community members to consider the impact that the City’s food system might

have on different areas of public concern. It also begins to assess the potential for

increasing the consumption of local foods among Oakland residents. This includes

exploring how systems of production, distribution, processing, consumption, and waste, as

percent of the City's food needs sourced from within the City and immediate region.

Posted by Paul Hughes at 3:54 PM No comments: 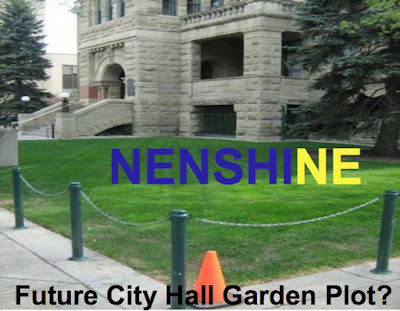 Email sent to Mayor Nenshi & all aldermen on 15Feb11:
Dear Mayor Nenshi & Aldermen,
RE: Nenshine: The Mayor's Garden @ Old City Hall
The Calgary Food Policy Council would like to team up with your office to plant a small, albeit highly visible & symbolic food garden on the lawn outside Mayor Nenshi's office. There are numerous precedents for this across North America, including Vancouver Mayor Gregor Robertson & Council's Community Garden. Additionally, the CFPC teamed up with the city & Downtown Calgary to plant the Calgary Downtown Community Garden on Barclay Mall (3rd St between 5 & 6 Ave SW). It is now going into its 3rd year. Standard Life also planted the 1st Corporate Community Garden in Canada last year.
Our volunteers and technical advisors will assist your office in designing, building & maintaining the garden.
We are suggesting a small plot, roughly the size of 2 sheets of plywood or 8' x 8'. We would plant 15 small rows of the favourite vegetable of each alderman & mayor. A simple layout has been attached.
Please let me know if you would like to proceed.
Paul Hughes
Posted by Paul Hughes at 3:07 PM 1 comment:

The city emailed me the following letter in response to my effort to source a 2nd opinion on the Triangle Building Roof. Click to enlarge. 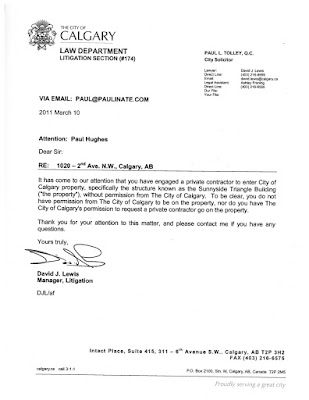 Posted by Paul Hughes at 2:45 PM No comments:

URGENT RELEASE: Dr Vandana Shiva event will proceed... The Show Will Go On!! 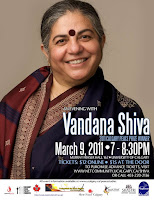 Dr Vandana Shiva event will proceed... The Show Will Go On!!

Dr. Vandana Shiva, respected environmentalist, activist, philosopher and author was scheduled to speak to a sold out audience of 1000 people at Mac Hall this evening. Her visit to Calgary was prompted by the awarding of the 2011 Calgary Peace Prize, which was to be presented to her by Mayor Nenshi tomorrow evening.

With great misfortune Vandana has been unable to cross the U.S. border and enter into Canada as officials claim her Visa has expired. However we are working extremely hard with Immigration Canada to have her arrive in Calgary.

THE SHOW WILL GO ON... Calgary Community Rallies to support Consortium Peace event

A diverse line up of local eco/food/peace celebrities has volunteered to speak at the event.

Kris Vester, Paul Hughes, Wade Sirios, Hugo Bonjean & Chris Turner will each address the audience for 10 minutes, followed by a panel discussion. Numerous local agencies will also be participating and information booths will be set up so audience members can have their questions answered about local food justice & peace issues. We are also working with Mayor Nenshi’s office to have him come and speak at the event.

The Consortium for Peace Studies at the University of Calgary had planned to honor Dr. Shiva for her commitment to social justice, empowerment of women in developing countries, her advocacy of human rights and her scientific analysis of environmental sustainability.

Her talk was to address elements of the global food crisis and its relation to democracy, gender justice and the environment.

Please check with the Consortium for Peace Studies website for further information. www.ucalgary.ca/peacestudies