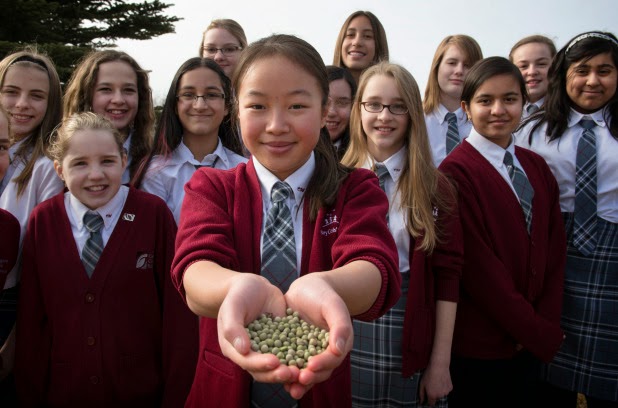 A plan sprouted by city Grade 7 students to help feed vulnerable Calgarians grew into a donation to help purchase one million seeds.
Back in December, Lisa Hood, teacher at the Calgary Girls’ School, told her leadership class about Grow Calgary. Within a matter of days, the girls held a fundraiser and rounded up almost $900 for the cause.
After the class participated in the Stuff-a-Bus campaign, they noticed that a majority of donated food was processed or boxed. Twelve-year-old Carly Cheung, one of the girls in the class, said that she wanted to help people have access to healthy options.


“I imagined myself in the position of someone who didn’t have the nutritious food that we have,” she said.
“And if you have a family, it would be even worse, because it’s one thing to not be able to feed yourself, but it’s another thing to know there are a whole bunch of people who you love that you can’t feed either. That really motivated me.”
The Grow Calgary farm is Canada’s largest urban garden. It sits on an 11-acre plot of land, with volunteers growing fresh produce for the Calgary Interfaith Food Bank. Paul Hughes, who organized the massive effort, said the girls’ effort is “inspiring to the entire organization.”
He said the donation will not only pay for one million seeds for the next harvest, but will also be used to invest in their “seed farm,” which cultivate seeds that can thrive in Alberta.
“What the seed farm is doing, and what the girls are contributing to, is the development of a local seed that is resilient for the Calgary environment,” he said.
Anjali Ford, 12, said she didn’t expect to raise so much money, but now that they have, she feels like she made a difference.
“I feel really proud because we came up with this idea ourselves,” she said. “It’s one thing for a teacher to have you do something, but it’s a whole other things to do something really big by yourself.”
Hood said that the girls were inspired by the fact that Grow Calgary was helping to feed those in need in a new way, and they wanted to help any way they could.
“And a million seeds later – here we are,” she said.
The class is hoping to help plant the seeds in the spring.