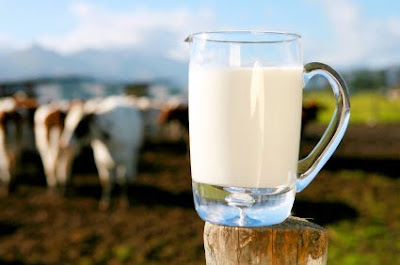 The LARGEST ORGANIC DAIRY in the is now licensed by the NY State Dept. of Agriculture and Markets to provide consumers directly with uncooked,unfooled-around-with, natural, organic RAW MILK. Jerry Dell Farms in , ( area) now has a NYS Raw Milk Permit according to NYS Ag & Markets Division of Milk Control and Dairy Services. Though large by local, organic standards, it is still a small farm compared to the large conventional industrial milk "factories". They produce about 30,000lbs or about 3,500 gallons of organic, pastured, quality milk per day, so COME AND GET IT NEW YORK!
Jerry Dell Farm is a family farm owned by operated Vaughn Sherman & family. We congratulate him on his commitment to quality organic dairy and on his courage to stand up to . Mr. Sherman is not only an Organic Valley member farm, but is also chairman of the OV Dairy Executive Committee (DEC) so this should be a very interesting situation as it unfolds. I'm sure most of you are well aware of the prohibition that has placed on its member farms regarding the sale of Raw Milk. As I said before, Jerry Dell is the largest organic dairy in the Northeast, more than doubling the production of the next largest farm, so I find it hard to believe that they will "kick them to the curb". They may regret it if they do as this farm is big enough to have its own bottling plant. NY Raw milk permits only allow on farm sales, but a small plant could provide the low-temp pasteurized, non-homogenized milk that has seen real growth in popularity. This option also offers the producer an alternative to the big monopolistic dairy coops and processors. Or better yet, we could all pick up the phone and tell your NY Senators and Assemblymen & Assemblywomen to LEGALIZE OFF FARM SALES OF RAW MILK! All our best to Vaughn Sherman & Family!
~Courtesy of Gianni Ortiz 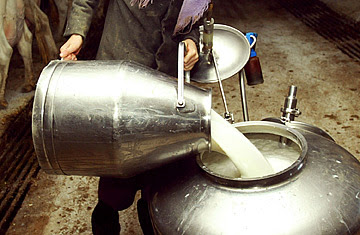 Posted by Paul Hughes at 4:09 PM No comments: 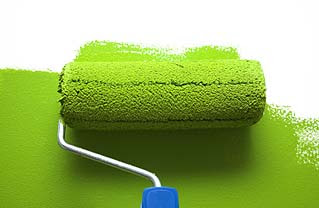 Posted by Paul Hughes at 5:04 PM No comments:

Canadian Charter of Rights and Freedoms

"Within the contours of the three rights that it protects, Section 7 (of the Charter of Rights and Freedoms) has potential for advancing social justice. By this I mean, s. 7 has potential for providing an appropriate amount of protection to individuals from injurious state action, corresponding to their reality within a state - controlled regime or system." ~James Hendry

Section Seven of the Canadian Charter of Rights and Freedoms is a constitutional provision that protects an individual's autonomy and personal legal rights from actions of the government in Canada. There are three types of protection within the section, namely the right to life, liberty, and security of the person. Denials of these rights are constitutional only if the denials do not breach what is referred to as fundamental justice.

Article 25
The Universal Declaration of Human Rights (UDHR) is a declaration adopted by the United Nations General Assembly on 10 December 1948 at the Palais de Chaillot in Paris. The Declaration has been translated into at least 375 languages and dialects, making it the most wid...ely translated document in the world. The Declaration arose directly from the experience of the Second World War and represents the first global expression of rights to which all human beings are entitled. It consists of 30 articles which have been elaborated in subsequent international treaties, regional human rights instruments, national constitutions and laws.

Article 25 of the United Nations Universal Declaration of Human Rights:

1. Everyone has the right to a standard of living adequate for the health and well-being of himself and of his family, including food, clothing, housing and medical care and necessary social services, and the right to security in the event of unemployment, sickness, disability, widowhood, old age or other lack of livelihood in circumstances beyond his control.

Article 25 on facebook
Posted by Paul Hughes at 2:13 PM No comments:

Email ThisBlogThis!Share to TwitterShare to FacebookShare to Pinterest
Labels: Alberta, Canadian Right 2 Food Trial set for 05 to 09March2012 in Calgary

How to Start a Balcony Farm 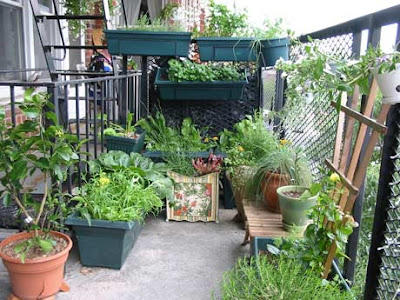 How to Start a Balcony Farm
The secret to a successful container garden is to think like a plant.

More people might become urban farmers if they had urban farms. What's an apartment-dweller with nothing but a narrow balcony in the sky to do?

Plant it. If the sun is shining on your space, you're in a farmable area. Even if it isn't, if you can see blue sky, you still have options.

Vegetables, edible flowers, cooking herbs, berry shrubs and fruit trees are all beautiful and nutritious, but they're also kind of dumb. They don't know if they're in a pot. They may have evolved over thousands of years to grow in the ground, but that doesn't make it the only place they will grow. Give your plants the basics they need and they will sprout and develop and flower and fruit even hundreds of feet in the air on a balcony or on a crowded ground floor patio outside your doorstep.

The secret to a successful container farm is to think like a plant. Just figure out what a plant needs, then provide it.

Full story: How to Start a Balcony Farm

A Revolution in Pain 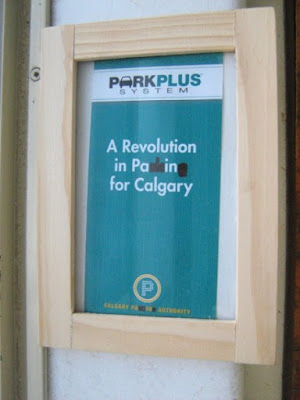 The Calgary Pain Authority
Posted by Paul Hughes at 4:04 PM No comments: 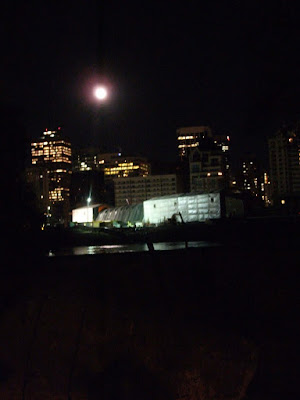 ssshhhhhhhhh, #yyc ... the peace bridge is sleeping
Posted by Paul Hughes at 12:43 AM 2 comments:

imagineCalgary, Lost in the BureaucraZy

imagineCalgary, an exquisite democratic tool built by citizens. The bible for Gov 2.0 aficionados. The Holy Grail of citizen engagement. A blueprint for deep systemic change.

imagineCalgary... RIP. No longer a blueprint for deep systemic change, but rather buried deep in the system, covered in layer upon layer of bureaucraZy, a sparkling document of hope languishing in plain-vanilla.

Regrettably, we are missing imagineCalgary targets as consistently as the Flames are missing the playoffs.

The Mother of all citizen engagement processes is in dire straits, mired in bureaucracy. 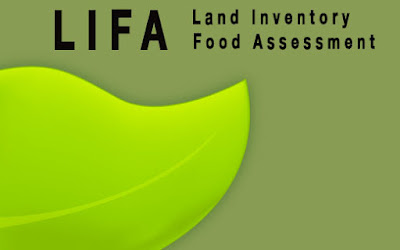 This is an Interactive Info Session on LIFA: Land Inventory & Food Assessment
LIFA #2- 12May11 @1830 @6.30pm Thursday
"What to do with all that land?!"
The Old Y 101-223 12 Ave SW Calgary, AB T2R 0G9
If there is one upside to Calgary's urban sprawl it is the abundance of city (citizen) owned land that can be used for stuff... like growing food.
At our first LIFA meeting we discussed the various elements of a Land Inventory and Food Assessment.
Calgary Food Organizations (Retail, Production, Distribution, Preparation, Assistance, etc)
In this meeting we will discuss the role of citizens, urban farmers, city admin and the provincial government.
We will also be addressing the potential uses for a LIFA. One of Calgary's first official Urban Spin Farmers, Sandy Aberdeen, will be attending to share his experiences as he enters into his second growing season.
Locavore Urban Farms http://locavorefarms.blogspot.com
Calgary Food Organizations (Retail, Production, Distribution, Preparation, Assistance, et al) are embarking on what is arguably the most important Local Food System related engagement process in the history of Calgary, a LIFA: Land Inventory & Food Assessment. Citizens are welcome to participate in this process.
Please RSVP to the Facebook Event http://www.facebook.com/event.php?eid=144245255643008
Additional Link: http://paulin8.blogspot.com/2011/03/lifa-land-inventoryfood-assessment.html
You can also contact Paul Hughes for more deets: paul@paulinate.com
Paul Hughes
@Hughes4YYC
paul@paulinate.com
http://paulin8.blogspot.com
Posted by Paul Hughes at 11:45 AM No comments:

Another 1 bites the Dust 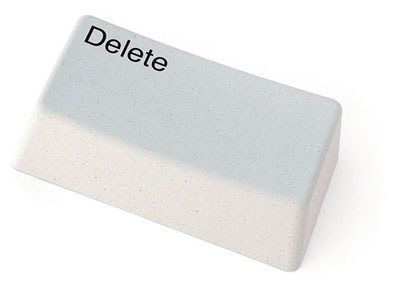 Posted by Paul Hughes at 2:00 PM No comments:

Missing (Dodging) imagineCalgary Targets
They are dropping like flies these days. Time for a concerted effort to revisit, update, evaluate and (gasp) meet the targets our city has committed to.

Governance Target 9 By 2008, and every year thereafter, groups/organizations/government report on how they have considered and adopted the imagineCALGARY targets and strategies that are relevant to them and in which they have been identified as having a role.

Posted by Paul Hughes at 9:45 AM No comments:

Office of Sustainability has Facebook Fan Page Shut Down 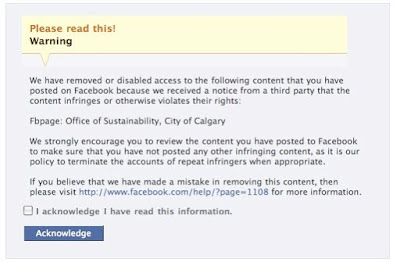 City of Calgary Office of Sustainability, charged with implementing imagineCalgary targets, some of which include governance, transparency, access by citizens, engagement & inclusiveness, had a citizen driven facebook fan page shut down. Gov20 & OpenGov take a hit from an unlikely source.
Posted by Paul Hughes at 3:39 PM No comments: 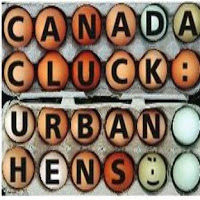 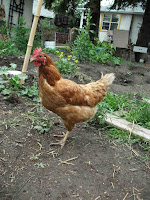 To draw attention to the plight and delight of chickens, United Poultry Concerns will display King-Size Bus posters, starting May 9, throughout the Washington, DC, Metro Area proclaiming "What Wings Are For" and "Life Can Be Beautiful-Go Vegan!" UPC will also host a peaceful protest on behalf of chickens at the White House on Saturday afternoon, May 7, from Noon to 3 p.m. We encourage people to join us.

"People flock to Washington, DC, in May to see the beauty of spring in the Nation's capital," says UPC President Karen Davis. "Our King-Size Bus posters and White House event are great ways to bring attention to the life of chickens and the joy of a compassionate diet. Mother hens and their chicks are traditional symbols of spring and rebirth, but the loving care of a mother hen for her chicks has been destroyed by the brutality of factory farming."

For a chicken trapped in the world of factory farming, to break out of the shell is to enter a deeper darkness full of bewildering pain and suffering from birth to death. During their terrible 6 weeks of life, baby chicks live in dark, filthy sheds on manure-soaked floors breathing poisonous fumes that burn their eyes so badly they rub their hurting eyes with their wings and let out cries of pain. At the slaughterhouse, the chickens "hang there and look at you and try to hide their head by sticking it under the wing of the chicken next to them. They're scared to death," said former slaughterhouse worker Virgil Butler, who became a vegetarian when he could no longer stomach this needless horror.

Shakespeare called the rooster "the bird of dawn and trumpet to the morn." In Letters from an American Farmer, published in 1782, St. John de Crevecoeur bespoke his admiration for the "gentle hen leading her chickens with a care and vigilance which speaks shame to many women." The purpose of International Respect for Chickens Day is to affirm the value of these experiences, native to chickens and emblematic of all life, and to encourage people to cherish chickens and Go Vegan.

United Poultry Concerns is a nonprofit organization that promotes the compassionate and respectful treatment of domestic fowl.www.upc-online.org